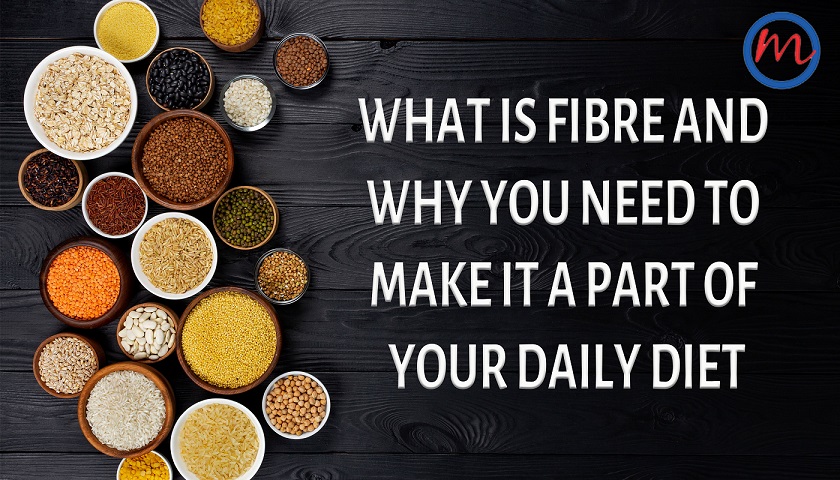 Preventive Care
What Is Fibre and Why You Need to Make It A Part of Your Daily Diet
November 24, 2020

It’s the most underrated of foods. It doesn’t give you taste, tang or thrill. It doesn’t give you energy or help you beat fatigue. It doesn’t give you micronutrients or calories. Your body doesn’t break it down or use it. Yet it is absolutely essential for your health and functioning metabolism. But because more and more of our foods are industrially processed today, it is going out of our diets. For people with diabetes, a diet enriched with it can be a life-changer.

We are talking of dietary fibres, also known as roughage or bulk, and found mainly in fruits, vegetables, whole grains, nuts, seeds and legumes. Most high-fibre foods tend to be low in calories, sugar, and fat, so they are generally healthy. Here we discuss what fibre is all about, the immense health benefits it can bring, how much dietary fibre you need, the foods that contain it, and how to add them to and why it is easy to incorporate it into your diet:

Dietary fibre, although not always defined as such, has been consumed for millennia and is recognised for having health benefits. The term dietary fibre was first coined by Eben H. Hipsley in 1953, for the non-digestible components of the plant cell wall, when he reported incidences of high blood pressure, protein in urine, swelling in legs, feet, and hands among pregnant women in Fiji Islands. He traced it to their low-fibre diet. Over time, a number of diseases were traced to lack of fibre in the diet. And the term “dietary fibre” was adopted.

The definition, that is now accepted, comes from British physician, Hubert Hugh Carey Trowell in the 1980s: “Dietary fibre consists of remnants of plant cells, resistant to hydrolysis (digestion) by the alimentary enzymes of man.” The American Association of Cereal Chemists (AACC) in 2000 defines dietary fibre as the edible parts of plant that are resistant to digestion and absorption in the human small intestine, with complete or partial decomposition and utilisation by microbes in the large intestine.

In plain words, fibre is different from all other food components, such as fats, proteins or carbohydrates that your body breaks down and absorbs. Fibre includes the parts of plant foods that your body cannot digest or absorb. Instead, it passes relatively intact through your digestive system—the stomach, small intestine and colon—increasing stool bulk, keeping the digestive tract flowing, until it is out of your body. Fibres are like the body’s sponge and broom, that cleanse out your gastric system daily.

Fibres have some intrinsic properties that make them different from other food. To begin with, they can be soluble or insoluble. Each acts differently in the gastrointestinal tract—soluble fibre like a sponge and insoluble fibre like a broom—and benefits the body in different ways. Soluble fibre absorbs water to form a gel-like material, mixes the food, slows down the rate of glucose digestion and consequent absorption in the bloodstream. It is found in peas, beans, apples, citrus fruits, carrots, oats, barley etc.

Insoluble fibre can be found mainly in plant leaves, peels, skins and the coverings of whole grains. It doesn’t dissolve in water, can absorb many times its own weight in water, promoting the movement of material through your digestive system and benefitting those who struggle with constipation or irregular stools. Whole-wheat flour, nuts, beans and vegetables, such as cauliflower, green beans and potatoes, are good sources of insoluble fibre.

Fibres play a unique role in controlling a number of events in the digestive tract. For instance:

Slowdown: All types of soluble fibres attract water and turns to gel during digestion, trapping carbohydrates and slowing the absorption of glucose. The slow digestion, so it takes longer for your body to absorb sugar (glucose) from the foods you eat. This helps prevent quick spikes in your blood sugar levels—an important part of managing diabetes. Soluble fibres also bind with fatty acids, flushing them out of the body and helping to lower LDL (bad) cholesterol. Insoluble fibres help hydrate and move waste through your intestines.
Several studies have shown that dietary fibre has a positive effect on the control of diabetes, body weight, blood pressure, heart disease and low-density lipoprotein cholesterol.

Transit time: The length of time taken by food to complete the trip from mouth to anus is called transit time. It is a key factor in a healthy digestive system because the longer food takes to pass through the colon, the more harmful bacterial products are produced. When the transit time is shorter, the colon is able to renew its inner surface, a sign of a healthier intestinal wall. Transit time varies from person to person but is usually around 24 hours for someone with a fibre-rich diet. It has been found that fibre may act as a protective factor in cancer of the large bowel by shortening transit time, thus reducing the time for formation and action of carcinogens.

Fermentation: A process when food (mainly carbohydrates) is decomposed and utilised by microbes. It takes place throughout the gastrointestinal tract but is highest in the large intestine, which contains huge numbers of bacteria. Some dietary fibres can be rapidly fermented, some are more slowly fermented, and some that are hardly fermented. The fermentation of fibres increase satiety, lower blood fat and cholesterol, reduce the risk of colon-related diseases as well as some metabolic syndromes, such as obesity, diabetes, chronic kidney disease, and systemic inflammation and give a boost in overall gut health. The least fermentable fibres are the most likely to increase stool output. Through its stool-bulking effect, fibre also lowers the concentration of faecal carcinogens, reducing carcinogen contact with the gut wall.

Less is more: A fibre-rich diet is lower in energy density, often has a lower fat content, is larger in volume and is richer in micronutrients. This larger mass of food takes longer to eat, its presence in the stomach brings a feeling of satiety, prevents overeating, speeds the passage of foods, facilitates regularity and bulk to stool. It is suggested that healthy adults should eat between 20 and 35 g of dietary fibre each day. Cereals are one of the main sources of dietary fibre, typically contributing more than 50 per cent of the fibre intake, 30–40 per cent dietary fibre may come from vegetables, about 16 per cent from fruits and the remaining 3 per cent from other minor sources.