Preventive Care
Prevention and Management of Diabetes
May 24, 2018

PREVENTION AND MANAGEMENT OF COMPLICATIONS OF DIABETES

Although by definition, diabetes is characterised by elevated glucose concentrations, the impact of diabetes on the health of individuals is almost entirely due to the long-term ‘complications’ of diabetes affecting almost every system in the body including eyes, kidneys, heart, feet and nerves. Complications of diabetes can be either acute or chronic.

Hypoglycemia or low blood sugar is an acute complication of diabetes and happens most commonly due to excessive dosage of anti-diabetic medications or undue delay in the intake of food. The symptoms of low sugar are usually non-specific and patients may feel some discomfort, sweating, palpitations, weakness and giddiness. In neglected cases, the patient may even go into coma due to low sugar.

Some patients, particularly children and adolescents, may present with ketoacidosis or coma as the first manifestation of the disease. As insulin deficiency worsens, ketoacids (formed from the breakdown of fat) build up in the blood and are excreted in the urine and breath. They cause shortness of breath and abdominal pain, lethargy, muscular cramps, disturbed consciousness, vomiting and severe dehydration. High blood sugar, acidosis and dehydration together cause a condition known as diabetic ketoacidosis or DKA. If diabetes is not diagnosed and treated promptly with insulin and sufficient intravenous fluids at this stage, the individual can lapse into a life-threatening diabetic coma.

Hyperosmolar hyperglycemic state (HHS) is a serious metabolic derangement that occurs in patients with diabetes and can be a life-threatening emergency. It is less common than the other acute complication of diabetes. HHS most commonly occurs in patients with type 2 diabetes who have some concomitant illness that leads to reduced fluid intake. Infection is the most common preceding illness, but many other conditions can cause altered mental activity, dehydration, or both. HHS has also been reported in patients with type 1 diabetes, in whom ketoacidosis is more common.

Chronic complications related to diabetes can be broadly classified as:

Unfortunately, many people do not discover that they have diabetes until they develop serious complications that substantially increase the morbidity and mortality associated with the disease and reduces their quality of life. 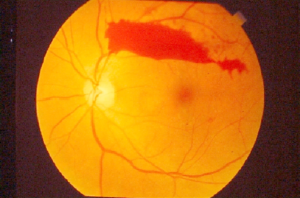 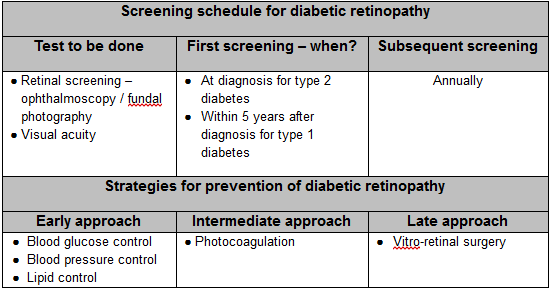 Diabetic nephropathy is a complication of diabetes, which tends to develop after many years and results in progressive loss of ability of the kidneys to function. This condition is a leading cause of end-stage renal disease (final stage of nephropathy), accounting for nearly one third of all newly detected diabetic individuals. Diabetic nephropathy usually progresses slowly through several stages including 1) leakage of tiny amounts of protein – called microalbuminuria into the urine, 2) increasing proteinuria leading to loss of large amounts of protein, causing ‘nephrotic syndrome’ a condition defined by fluid retention and swelling due to low amounts of protein and 3) the kidneys become less able to remove ‘poisons’ from the blood resulting in a build up in the levels of various chemicals such as urea and creatinine. This is known as ‘chronic renal failure’ or ‘end stage kidney disease’ (ESRD).
During the early stages of diabetic nephropathy people are usually without any symptoms. As the condition progresses, individuals with diabetic nephropathy may present with swelling of the feet and legs and later throughout the body (edema), increase in blood pressure, larger amounts of protein leaking into the urine (macroalbuminuria) and elevated levels of fats (cholesterol and triglycerides) in the blood. Once the kidneys are more severely damaged, blood sugar levels may drop because the kidneys retain insulin in the body. Other symptoms may occur as nephropathy worsens. Screening for nephropathy or its earlier stage, microalbuminuria, is important because it is associated with high risk of progression to more advanced nephropathy. Diabetic individuals, especially those with kidney complications, also face an increased risk from cardiovascular disease. Intensive management of diabetes and its symptoms, including tight control of blood sugars and blood pressure, can slow the onset and progression of diabetic nephropathy.

Diabetic neuropathy (nerve damage) is one of the commonest complications of diabetes and certainly one of the most distressing leading to a loss of sensation in several parts of the body. Diabetes damages the nerves in two ways: a) poor control of diabetes can damage the outer lining or insulating layer that protects the nerve cells, b) it can also attack the tiny blood vessels which supply oxygen and other essential items to the nerves. In either case, the nerve cells may die or fail to function properly. 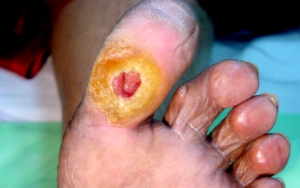 Diabetic neuropathy may cause a number of complications including damage to the nerves in the feet, which along with poor circulation, can lead to ulcers and even the dreaded gangrene leading to amputation of feet. But it is not only the feet that are vulnerable-diabetes-related neuropathy can affect any organ in the body including the digestive tract, heart, and sex organs. The symptoms of diabetic neuropathy are numbness and loss of sensation in the feet, some patients complain of pins and needles, pricking sensation, burning of feet or even severe pain in both feet. The best way to prevent neuropathy is to keep blood glucose levels as close to the normal range as possible. Maintaining safe blood glucose levels protects nerves throughout your body.

Diabetes mellitus is one of the risk factor for cardiovascular disease. Due to rapid changes in demography and lifestyle consequent to economic development a dramatic increase in the prevalence of coronary artery disease/heart attacks has been predicted in the next 20 years. Death due to heart attacks is two to four times higher in Type 2 diabetic patients compared to non-diabetic patients. Diabetes is also one of the causes of premature heart attacks. Indians have the highest prevalence rate of coronary heart disease in the world. In the Chennai Urban Population Study carried out by our centre, it was observed that 21.4% of the diabetic subjects had CAD. The three main approaches to prevent CAD in diabetic individuals would be to control blood glucose level, blood pressure and blood lipid levels. In addition dietary modifications (low fat diet), cessation of smoking and increasing physical activity help immensely in prevention of CAD in diabetic individuals.

Diabetes mellitus is an independent risk factor for cardiovascular disease. Unlike type 1 diabetes, type 2 diabetes has a higher risk for cardiovascular disease, the prevalence of which is estimated to be 2 – 4 fold higher compared to non-diabetic indiviiduals. This is because type 2 diabetes is a component of the metabolic cluster, which is associated with other risk factors like insulin resistance, high lipids, high blood pressure, abdominal obesity and prothrombotic state. Diabetes accelerates thickening of arteries leading to increased risk of heart attacks, especially if the patient is a smoker or has high blood pressure and cholesterol. Individuals with diabetes can have heart attacks even without any of the usual symptoms like chest pain, sweating etc., because the nerves are affected first. This means that careful checkup of the heart should be done even in the absence of symptoms. Control of blood sugar and lipid levels like cholesterol and triglycerides and blood pressure along with weight reduction and life style modification is mandatory to reduce the risk of heart disease in diabetic individuals.

Diabetes is a major cause of peripheral vascular disease. Peripheral vascular disease is the medical term for problems associated with poor circulation to the toes, feet and legs. The prevalence of PVD is several folds higher in patients with diabetes compared to non-diabetic patients. Regular screening by `physical examination and doppler examination is necessary to identify people with PVD.
Exercise can help circulatory problems. The muscles of the legs have a massaging effect on the blood vessels and help maintain normal passage of the blood.Adequate exercise which is appropriate to a person’s general health and age will do much to benefit the entire circulatory system. Satisfactory blood sugar control, cessation of smoking and normalization of blood pressure and serum lipids are essential prophylactic and therapeutic measures. Surgery may be useful in a small number of cases suitable for bypass grafting.

Recent studies have now shown that intensive diabetes control designed to achieve normal blood sugar level has a significant impact on lowering the risk for developing microvascular complications. For prevention of macrovascular complications, a multipronged approach with tight diabetic control, adequate control of blood pressure and lipid lowering along with life style modifications (diet and exercise) would probably be needed.

END_OF_DOCUMENT_TOKEN_TO_BE_REPLACED

One Reply to “Prevention and Management of Diabetes”