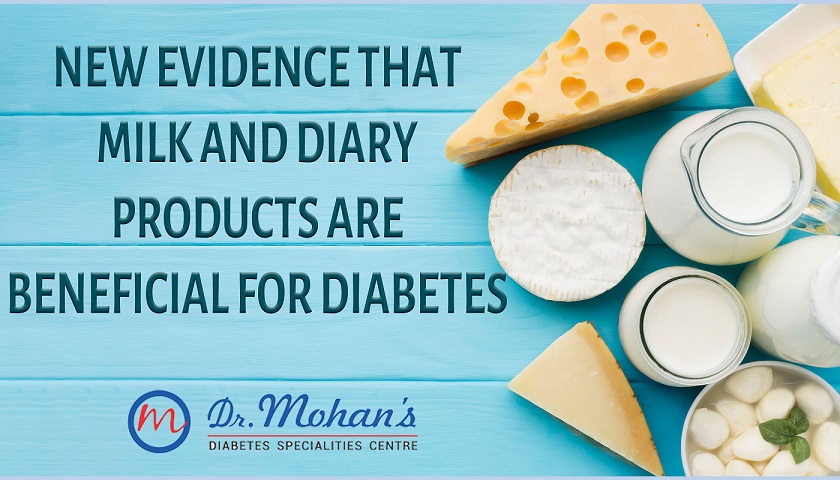 New Evidence that Milk and Diary Products are beneficial for Diabetes
November 26, 2020

Is milk consumption healthy if you have diabetes? That’s one of the most controversial questions. A new line of research, however, is zeroing on new truths. Which shows that milk including full-fat milk may actually be protective against diabetes and heart disease

What is the best milk for people with diabetes? Low fat? Full fat? Toned? Low carb? A lot of milk or no milk at all? As with everything related to nutrition and diabetes, the answer is not easy. Here we review what a new line of research shows, along with the pros and cons, to help you decide what is best for your health, especially if you have diabetes.

Milk has got a bad rap for quite some time. It has been pointed out that humans are the only species that consumes milk of other animals and as adults. That, biologically, cow’s milk is meant to feed growing calves, not adults and not human at any rate. That, from an evolutionary perspective, milk was not consumed until about 10,000 years ago, when the agricultural revolution took place and humans started domesticating animals. Before this, humans only drank mother’s milk as infants.

In terms of health, it has been said that dairy isn’t necessary for optimal health. Three out of every four people in the world are intolerant to the lactose sugar in milk and get digestive problems. That, the nutrient composition of milk depends on how cows have been raised: grass-fed, pasture-raised cows contain more beneficial fatty acids and fat-soluble vitamins, especially vitamin K2, than dairy-raised cows. These healthy fats are also not present in low-fat or skimmed milk.

Conventionally, the high saturated fat content of milk has been believed to have adverse impact on the heart. Public health guidelines have advised people to minimize their intake of saturated fat, especially full-fat dairy products. For decades, doctors have prescribed low-fat or non-fat milk against the risk of heart disease or stroke. Most health authorities recommend minimizing intake.

There have also been studies that link milk and dairy products to an increased risk of acne, type 2 diabetes, Alzheimer’s disease, breast, ovarian and prostate cancer. Apart from saturated fat, bioactive molecules in milk have been associated with these. There is, however, no compelling and consistent evidence that people should avoid milk. While some studies reveal increased risk, others find no effect. The scientific community has been divided in its opinion.

It is difficult to categorize milk as healthy or unhealthy. The effects of milk vary between individuals and countries, depending on how cows have been raised and fed. In countries where cows are largely grass-fed and pasture-raised, dairy has been linked with major reductions in disease risk. Their milk also has a much better nutrient profile, including K2. Fermented dairy products like yogurt, rich in probiotic bacteria, can have numerous health benefits.

In the last decade, scientists have started questioning the earlier apprehension regarding of dairy fat in the development of diseases. Several studies have linked full-fat dairy products to a reduced risk of obesity and type 2 diabetes. Some have claimed there is no link between saturated fat consumption and heart disease for most people. Others suggest that full-fat dairy has a protective effect on both heart disease, stroke, blood pressure and inflammation.

The relationship between milk consumption and type 2 diabetes has been examined in a number of studies. The evidence to date indicates that diets rich in dairy foods are linked to lower risk of type 2 diabetes and related metabolic risk factors such as levels of blood glucose, insulin and circulating blood fatty acids. While health experts generally advise reducing full-fat dairy products, the new research suggests high-fat milk, as well as yogurt and cheese, with a reduced risk of developing type 2 diabetes as shown by the PURE STUDY.

Here are some of the studies that have changed the landscape and recommendations on milk and diabetes:

A component in milk may cut diabetes risk, suggests a 2010 study led by the researchers of Harvard School of Public Health. The researchers have identified a fatty acid found naturally in milk (trans-palmitoleic acid) that may reduce the risk of type 2 diabetes. Individuals with higher circulating levels of trans-palmitoleic acid were found to have a much lower risk (60%) of developing diabetes. This study (published in Annals of Internal Medicine, December 2010) has given the first clear biologic explanation for the lower risk of diabetes seen with higher dairy consumption.

Fats specific to dairy products have been found to have a role in prevention of type 2 diabetes, show researchers of the Lund University Diabetes Center, Sweden, in a study conducted on 26 930 individuals, aged 45-74 years (published in Diabetologia, September 2014).

People with the highest consumption of high-fat dairy products—eight or more portions per day—had a 23 percent lower risk of developing type 2 diabetes than those with the lowest consumption—one or less per day. In contrast, no association was seen between low-fat dairy intake. And meat intake was associated with increased risk of diabetes, regardless of fat content.

Research by The University of Texas Health Science Center at Houston found no significant link between full-fat milk, yogurt, cheese and butter with all-cause mortality. Published in the American Journal of Clinical Nutrition, July 2018, the research measured plasma levels of three different fatty acids found in dairy products on 3,000 adults age 65 years and older, for 14 years. The findings strengthened the growing body of evidence which suggests that dairy fat, contrary to popular belief, does not increase the risk of overall mortality in older adults.

Dairy-rich diet was linked to lower risks of diabetes and high blood pressure in a large international study the PURE STUDY by Bhavatharani published in May, 2020, in BMJ Open Diabetes Research & Care. The linkages were strongest for full-fat dairy, explained researchers, in which Dr. Mohan from the Madras Diabetes Research Foundation was also a Co-author.

Previous research linking higher dairy intake with lower risk of diabetes, high blood pressure, and metabolic syndrome, largely focused on North America and Europe. One PURE STUDY study—conducted on about 113,000 participants between age 35 and 70—was the first to test people from 21 countries, including India. The participants had at least three of the following five metabolic syndromes:

It was found that eating at least two daily servings of dairy lowered risks of diabetes and high blood pressure, as well as the cluster of factors that heighten metabolic syndrome. This was an observational study, and as such did not establish cause. According to the researchers, “If the findings are confirmed in sufficiently large and long-term trials, then increasing dairy consumption may represent a feasible and low-cost approach to reducing metabolic syndrome, hypertension, diabetes, and ultimately cardiovascular disease events worldwide.