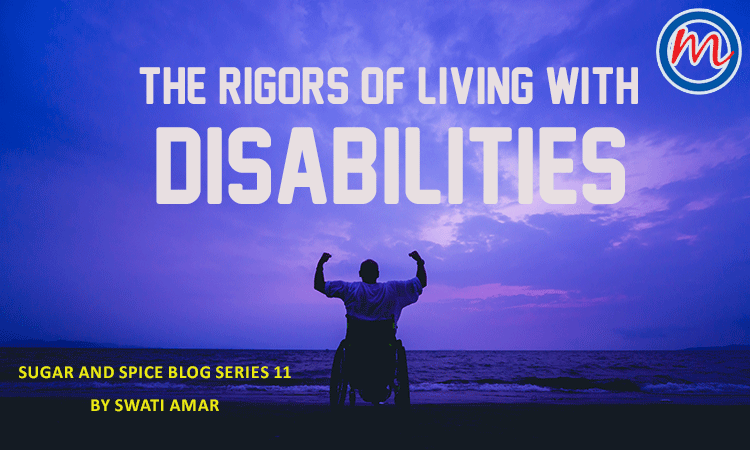 The rigors of living with disabilities
January 6, 2021

The fact that we are living in an unequal world becomes apparent when you have a family member with a disability or you are disabled yourself. Every living being is worthy of respect and resources on earth suited to their own existence, but this truth has not been recognized by most societies. In a country where people take the liberty of intruding into other’s lives, judging and stereotyping people and rendering unsolicited counsel based on their own limiting beliefs, it is very difficult for a person with a disability, or an unseen disability, such as an autoimmune condition, to live with dignity.

I once again quote the Social model of disability, which says that people are disabled by barriers in society, not by their impairment or difference. Barriers can be physical, like buildings, not having accessible toilets. Or they can be caused by people’s attitudes to difference, like assuming disabled people can’t do certain things. The social model helps us recognize barriers that make life harder for disabled people. Removing these barriers creates equality and offers disabled people more independence, choice and control and thus enables them to live fulfilling lives, realizing their fullest potential possible.

However, sensitivity is not a quality that is being taught in schools. Or the concept of respect for fellow beings, environment and resources. Movies in India are seen to ridicule persons with physical and mental disabilities and show them in bad light such that disabled persons are branded and put into ‘brackets’ as outcasts. Those who are already distressed are put through greater stress due to insensitive treatment by people. For those living with autoimmune conditions, which are often unseen disabilities, this is a constant battle that they have to fight, which may lead to more autoimmune conditions or greater severity of their symptoms.

Despite the efforts I took to educate the teachers, the school staff and her friends, Niky had a tough battle to fight when she went back to school after being diagnosed with Type 1 Diabetes. Even though she always got the top rank, the school insisted she wrote the half-yearly exam she had missed when she was admitted to the hospital. Niky had to attend classes, then squat outside the classroom on the ground after school, where she was given question papers and had to take the tests. In between, she had to ensure she had her snacks, drink water or go to the loo, as the sugars tend to go high, when in stress. She had to do this for about a week. The school did not take the view that she had proved to be a conscientious student and she could be evaluated on the basis of her past performance or future tests. They did not give her a comfortable desk where she could take the exams. They were obsessed with conducting their exams more than the difficulty and stress imposed on the disabled child.

But what impacted her most was that many of her classmates kept ridiculing her or taunting her for her condition, or about her eating frequent meals or body-shaming her. She used to come home and narrate everything that happened at school. There was this boy Arjun Krishnan, who was a topper among boys, who one day said to her, “I wish your sugar goes low or you get into a diabetic coma and die!” Niky became terribly upset and to this day carries the memory of these harsh words! I was shocked when she told me this. I called Arjun’s father and spoke to him and requested him to educate his son on how to treat a classmate who had a disability. His father was reassuring. However the next day, the boy reported to the class teacher that Niky’s mother was interfering with his family. The hardest-hit for Niky was that the class teacher stood by Arjun and chastised Niky for reporting about the boy to us. I had sent a recorder with Niky to record what happened in school to get an idea about what was going on. When I heard the class teacher scolding Niky, I was shocked! This unsavory incident throws light on how the disabled are persecuted, branded and treated unkindly by society. When someone in the teaching profession can be blind to the sufferings of a little child who is disabled, what can one expect from society? Sadly, this situation has not changed in our country even today. On the one hand, people with differences and special abilities are increasingly spreading awareness of the need for creating an equal world. On the other hand, insensitivity among people is increasing! This has to change. We need to create a culture where every individual, irrespective of their ethnicity, class, differences, special abilities, or sexual orientation is treated with kindness and respect.

Niky’s school education continued on similar lines, with many such incidents impacting her self-esteem adversely, despite the fact that she was academically brilliant and was winning several awards in painting, writing, spoken events and music. Her foray into newspaper writing was not accepted without its own drama at school!