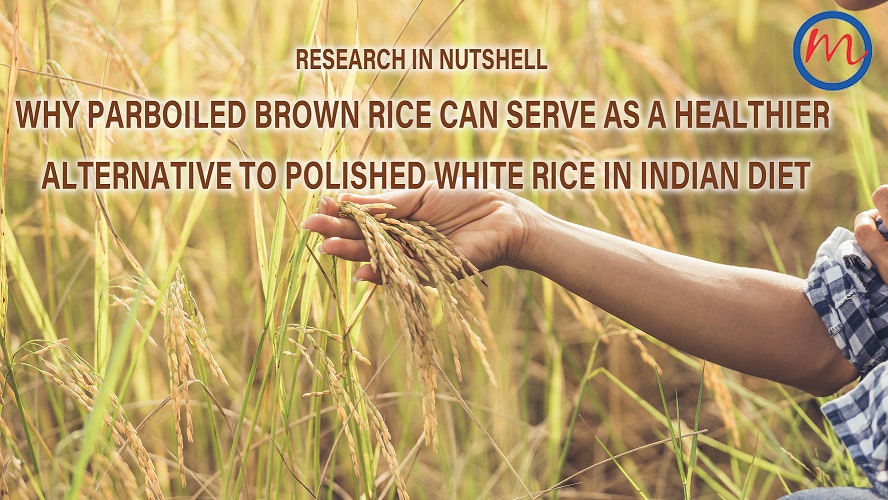 Why Parboiled Brown Rice Can Serve As A Healthier Alternative To Polished White Rice In Indian Diet
October 8, 2020

In 2017, scientists at the Madras Diabetes Research Foundation undertook a novel research: to put to test varieties of rice in the laboratory. Their aim was to evaluate the effects of different types of rice processing on the nutrition quotient of the commonly consumed grains. Given the rapid rise of chronic diseases in India, their objective was to proffer healthier alternatives to polished white rice in the Indian diet.

They found the parboiled common brown rice to be superior to polished white rice. This was true even for under-milled white rice grains. This study proved for the first time in India how even minimal polishing affects the structural integrity, composition and nutritional quality of rice grains. The following is a sum-up of the study.

FROM FARM TO FORK

The journey of the rice grain from farm to fork is a long one. When paddy comes into the mill and the grain is dehusked before being sent to the market, we get brown rice. When the grains are further passed through abrasive whitening machines, to remove the bran from the kernel, we get white rice—the most commonly consumed rice in India.

There is also rice that is partially boiled in the husk. Called parboiled rice, this type of rice processing is believed to be over 2000 years old. Easy to cook, parboiled rice is also nutritionally superior to regular white rice, as the process drives some of the nutrients, especially B vitamins,  back into the grain. Parboiled rice is common in North America and extremely popular in Southern India.

Despite the pretty picture white rice makes on the platter, polishing ruins the grain: most of the richest nutrient content—the bran, the aleurone layer and the germ—is removed. Proteins, lipids, vitamins, minerals, fibres are washed away, leaving all the carbohydrates behind. It is well-known that the common Indian white rice grains have a high glycemic index (GI), a scale that ranks foods based on their ability to raise the blood glucose.

There is, however, a gap in research: the GI of Indian brown rice varieties are unknown. No data exists on how the GI varies with different degrees of polishing within the same rice variety. This study examined the GI of three types of the common Bapatla Indica rice grains: parboiled brown rice with 0% polish, under-milled rice with 2.3% polish and white rice with 9.7% polish.

The objective has been to evaluate the effect of polishing on the GI of Indian parboiled brown rice. This variety has been chosen as it is one of the most common rice grains consumed in southern India. Earlier studies have shown similar glycemic responses to a single long grain Indica rice variety. However, there are no data on the GI of parboiled brown rice and white rice, and none that compare under-milled grains and rice processed to different degrees of polish.

The Bapatla grains were procured from the National Seeds Corporation, Chennai, India. The glycemic properties of rice vary due to several factors: varieties of grains, processing methods (such as type of parboiling, milling, pre-germination, degree of gelatinisation, physical form as food, degree of chewing, type of starch content. Moreover, each variety of rice may have unique carbohydrate profile and molecular architecture. For this reason, the same variety and batch of grains, grown under identical conditions, were studied.

The grains were cleaned and parboiled by soaking in cold water for seven hours and steaming for 10 minutes. Grains were then dried and dehusked to prepare brown rice. A portion of it was milled in Buhler emery polishers—to a degree of 2.3% and 9.7%—based on the amount of bran or polishing removed. A total of 12 healthy participants, between age 20 and 45, participated for the GI study. In addition, there were 13 overweight individuals for continuous glucose monitoring (CGM).