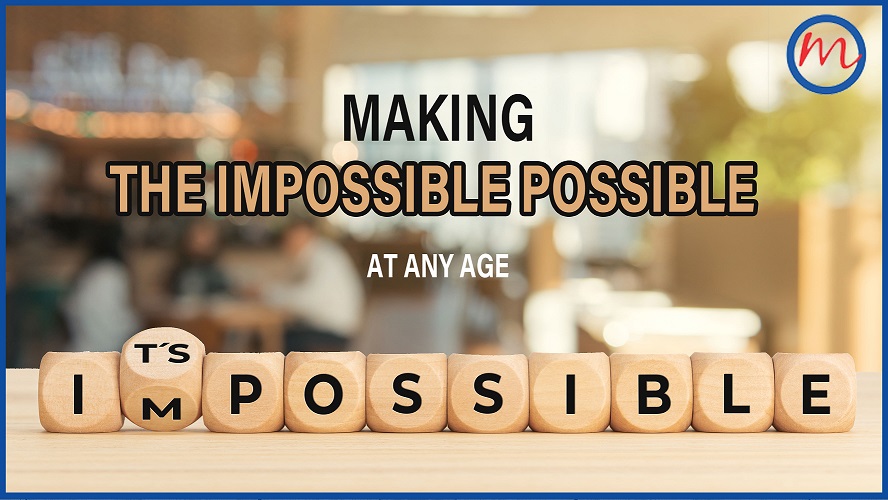 Making the impossible possible – at any age
September 10, 2020

I was consumed by the desire to take up an unusual challenge on approaching my 70th birthday in January 2019. I thought a 1000 kms cycle ride in Karnataka was a decent enough challenge but my younger and more aggressive cycling friends suggested a more challenging 4000 kms. This shook me and suggested that a 1000 kms each quarter over the year was doable. My friends would have none of it and inspired me to do it all in one quarter. The challenge seemed completely beyond me but I decided to accept it, dedicating the ride to celebrating active ageing and to sensitising the young and the not so young on the critical needs of elder care.  HelpAge India was my partner for this venture and when Mathew Cherian, the CEO of HelpAge India, and I shook hands, I had committed to cycling from Chennai to New Delhi, a distance of approximately 3000 kms, in 58 days not knowing what was in store. 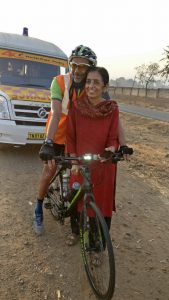 My wife reluctantly agreed to accompany in a support vehicle. She was uncomfortable but her need to stay by my side and take care of me, on this outlandish adventure, out weighted any misgivings. A cousin and his wife agreed to join us and provide company for my wife on this two month odyssey. It was important to arrange a support vehicle, a tempo traveller, that the support team could travel in and also carry supplies and luggage. The support vehicle and our boarding and lodging was expensive and futile attempts to secure sponsorships from corporate houses was discouraging. I went ahead planning and organising the cyclothon, deciding to carry on come what may. Thankfully, at the right time, several family members, friends and colleagues stepped up to assist with the expenses. 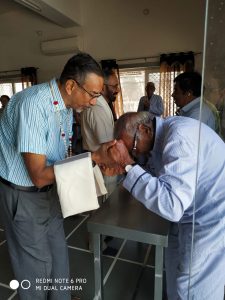 I also received a generous sponsorship from Tata Coffee and HelpAge, inspired by the early success of the cyclothon, took some of the expenses of the later stages of the event. Besides, they provided stay at many old age homes along the way. TI Cycles came forward to provide technician support to maintain my cycle in good condition from start to finish. I received support in excess of my needs and was able to make small donations at several old age homes along the way and a decent donation to HelpAge for their old age care programmes.

Preparation for this challenge started six months in advance. Deciding on the route and the places to halt each day was critical and needed to be planned in advance. The route had to be suitable for long distance cycling besides meeting the needs of visiting old age homes and other care facilities suggested by HelpAge. It was prudent to stick to the national highway running through the states of Tamilnadu, Karnataka, Maharashtra, Gujarat, Rajasthan and Haryana before reaching New Delhi.  The halts were based on what was a reasonable cycling load for the day, taking into consideration the elevation profile, weather and climatic conditions. On an average I cycled for about 70 kms each day, less on certain days and more on others with a maximum of 120 kms on one day. Careful planning was an important contributor to the success of the cyclothon. The details of the planning exercise would be of interest only to a die-hard cycling enthusiast and so glossed over here.

Getting an ageing body ready

Physical and mental preparation for the endeavour was by far the most important element of the cyclothon. It involved preparing an ageing body to cycle for four to five hours each day and do it day after day without breaking down or falling ill over the two month duration of the event.  Also important was not to suffer injuries or fall ill during the six month period leading up to the event. This would have negated all the previous training benefits and the need to start from scratch again. These are the unique challenges that a 70-year old has to contend with when taking on a challenge many younger people find too daunting. The daily schedule during the training phase was a 11/2 hour cycle ride in the morning and an equivalent time of cardio, strength and flexibility training in the evenings. A stationary cycle, a few weights and a yoga mat was alI I needed for the indoor sessions. The training load increased closer to the start of the cyclothon with more difficult cycle rides and increased indoor effort. You can never tell if your training and preparation is adequate but it was wise to prevent falling ill or getting injured. Muscle injuries can take a long time to heal. Thankfully, I was fit and had no illness all through the training period. This is the benefit of regular physical activity. We gain not just fitness and endurance but also improved immunity.  The only physical injury in training was during a cycle ride when an error of judgement, at fairly high speed, led to a fall that bruised my knees and hands. The nasty fall cracked my helmet, but as they say, better a cracked helmet than a cracked skull. When the event was flagged off at Elliot’s Beach in Chennai in January 2019, I was fit and raring to go. 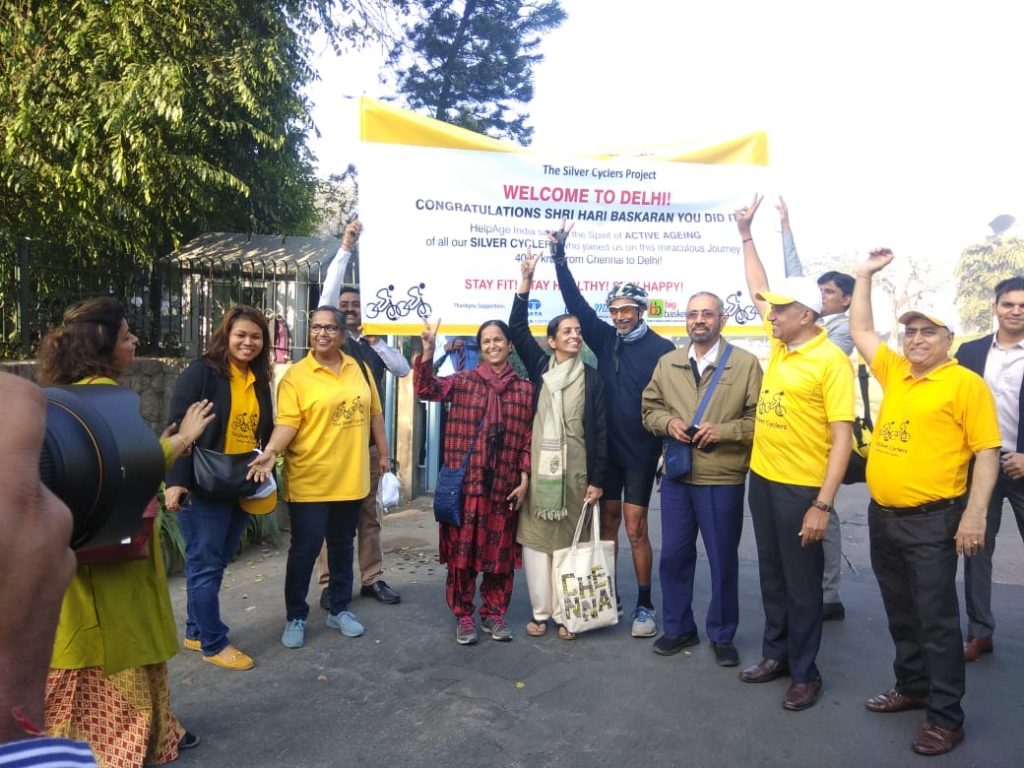 Great care was needed during the two month long cycling endeavour to prevent muscle injuries and illness including stomach upsets. Illness and fever would mean stopping the event till I was fit again to cycle, upsetting all the arrangements. Strenuous cycling soon after an illness is not what the doctor would order. Care was necessary to keep doing stretching exercises at halts during the cycling sessions and before and after each session. By doing this meticulously I avoided major muscle soreness and injury. A certain amount of soreness and pain is inevitable but it did not affect the daily cycling. Proper hydration is a must. On the advise of specialists I kept hydrated with tender coconut juice, water and electrol at the right intervals. Eating right was to be strictly followed. My diet on the cyclothon included a couple of boiled eggs and idlies or poha for breakfast, small portions of rice and dhal or dhal kichadi for lunch and dinner with boiled vegetables. There was no non-vegetarian food and no chilies or masala in any of the dishes. On this spartan diet I lost 7 kilos in the first month but thereafter my weight stabilised. More importantly I remained free of illnesses.

An endeavour of this duration and physical effort will bring it’s share of pain. Pain just above the knees and in the lower back and shoulders affected me from time to time but they were not show stoppers. A mild fever and sore throat at a pre-planned halt for a few days at Belgaum worried me. Frequent gargling with warm salt water and medication to keep the fever in check helped and I continued cycling without any change in programme. A fall on the outskirts of Udaipur caused bruises on my knees and hands but this was promptly taken care off by a mobile medical unit of HelpAge and a tetanus injection at a government hospital. The most painful was the dreaded saddle sores. I had to contend with a sore bottom for the last 1000 kms of the cyclothon. There was nothing that could be done except to take care that the affected areas did not rupture and get infected. This could have led to aborting the cyclothon. I managed with a selection of gels, although there was pain and some discomfort. Cyclists of any age learn to cope with these long distance cycling hazards.

It was with an exhilarating sense of achievement that I cycled into Delhi to a memorable welcome arranged by HelpAge India. Around 50 senior citizens and school children accompanied me for the last kilometre as we cycled into India International Centre, for the grade finale. HelpAge had made this adventure particularly memorable by the many events they arranged all along the way. I got to interact with children from orphanages, and schools for the visually impaired, palliative care facilities and many old age care homes were we stayed overnight. These events outside the cycling were moving and taught me what it takes to provide long term care for those who are disadvantaged and need it the most.

Friends ask me if I would taken on a similar challenge again in the near future. Yes, I would. Age is not a bar. If we make up our mind to accept a challenge we can do it with the right precautions and preparation.