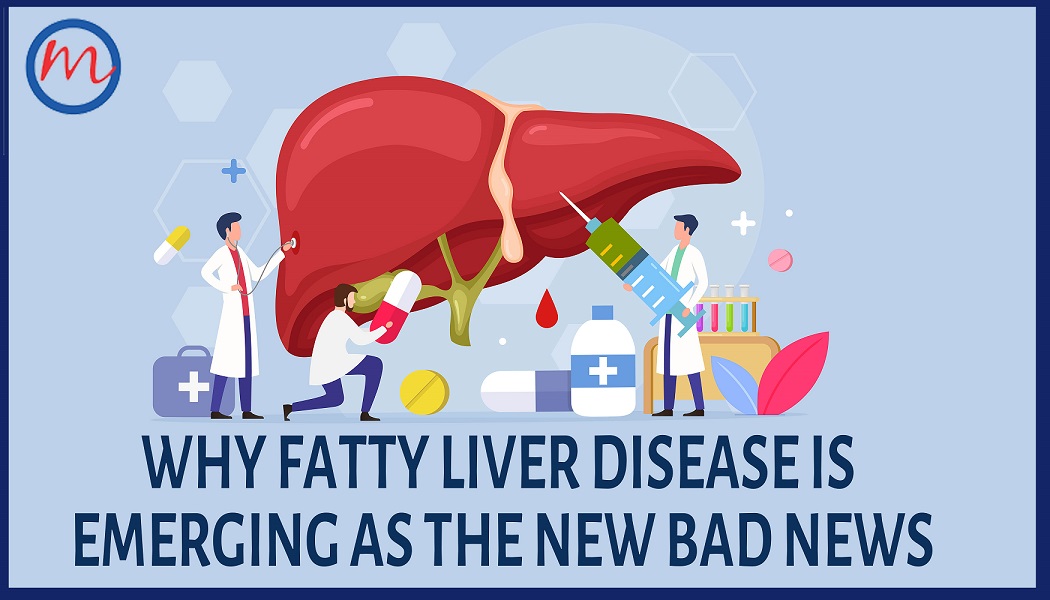 Why Fatty Liver Disease is emerging as the new bad news
November 13, 2020

Invisible fat lurking in the body’s most silent organ is a rapidly emerging health crisis, especially in urban India. And it is no longer limited to people who drink excessively. Recognized in recent years, in the wake of the epidemics of obesity and diabetes, there is still very few published research and almost no treatment yet for fatty liver disease. What is coming to light are scary statistics:

Non-alcoholic Fatty Liver Disease (NAFLD) begins with fat molecules accumulating inside liver cells. It is more common in people who are overweight or obese, especially with fat concentrated in the abdomen (although people with fatty livers are not always obese); have high cholesterol and high triglycerides in blood; have metabolic conditions, pre-diabetes or type 2 diabetes; suffer from sleep apnea; have under-active thyroid and pituitary glands; are troubled by polycystic ovary syndrome.

Many parts of the body come to grief once people become obese or develop diabetes. So does the liver, given the central role they play in metabolic processes. When the fat stores in the body reach optimal level, and the body continues to receive excess fat, then the stores start throwing out fatty acids into the liver. For people with diabetes, insulin resistance is the central pathogenic factor. When people are insulin resistant, their muscle, fat and liver cells don’t respond normally to insulin, so levels of the hormone—and the blood sugar it ushers into cells—build up in the blood. Fatty liver disease occurs when some of the fat molecules accumulate inside liver cells.

NAFLD can stay as a low-grade condition for years, with some indefinite symptoms: vague aches in the upper right side of the abdomen, fatigue, nausea, occasional fever, feeling run-down. Routine blood tests reveal higher than normal levels of liver enzymes. A prolonged build-up of fat in a person who does not consume alcohol it is called Non-alcoholic Steatohepatitis (fat-induced inflammation of the liver) or the acronym NASH. People may live with it for years, but NASH can also start a cascade of serious damage to the liver and attempts by the organ to regenerate itself.

Over time, the damage can change the structure of the liver irreparably. Ultrasound images show the liver bright, with spreading rivulets of fatty tissues hardening the smooth, soft organ. The outcome can finally lead to hepatic fibrosis, cirrhosis, liver failure and even liver cancer. There’s some evidence that liver inflammation also damages the insides of arteries and makes blood more likely to clot, a combination that can lead to heart attack or stroke. It is impossible to predict who will develop what and when, but the longer NAFLD remains hidden, the stronger the chances are. Primarily a condition of middle age and men are particularly vulnerable to it.

Liver damage is the body’s slow response to the changing nutritional challenge. Almost unknown as a disorder in the 1980s, obesity invaded India since the 1990s. In the last three decades, as income per head grew over four-folds so did the girth of the nation. At its root is a ‘nutrition transition’ as a consequence of free markets and globalization of economies. Food balance data from the Food and Agriculture Organization of the United Nations (FAO) show: in the affluent Indian cities, coarse grains have been largely substituted by polished cereals while consumption of meat, fat and sugar in the diet has more than doubled since the 1980s.

The rise of animal products in diet has pushed up the supply of dietary energy at a time when physical activity has declined as a result of increasing mechanization. Subnormal physical activity has been found to contribute to fatty liver disease. The problem may occur in middle-aged, but a poor lifestyle can set it off much earlier. Weight gain, especially around the waist, and over-dependence on junk food and a sedentary lifestyle make matters worse.

In this new age of obsessive weight loss, fad diets, supplements and meals, skipping meals is often seen as a slimming strategy. It is, actually, a crime against the liver: when eating time is pushed, people just gobble what comes their way. Fast foods come as a handy option. And erratic eating time also means an intake that could be higher than usual. Together these factors lead to fat accumulation on the liver.

Most people with fatty liver disease don’t have symptoms. Ultrasound, CT or MRI scans show up the fat in the liver and a regular ultrasound once a year women suffice. To diagnose  NASH-related inflammation, currently, liver biopsy is the only way to make a definitive diagnosis.  However this is not needed in everyone. As for treatment, there has been a fair amount of research into using diabetes drugs to treat NASH, even in people who don’t have diabetes, because they reduce insulin resistance, the root cause of fatty livers. Large doses (800 IU daily) of vitamin E has shown some favourable results, as has fish oil. None of the results, however, is conclusive.

The main solution seems to lie in weight loss. From changes in diet and an increase in physical activity, it has emerged as the only line of recommended treatment for most cases of fatty liver disease and NASH. Weight loss seems to have a direct impact: as people lose weight, the fatty liver becomes less fatty. Rapid weight loss, however, can damage the liver. In addition to encouraging people to lose weight, people with diabetes who have fatty liver disease or NASH need to be vigilant about controlling their blood sugar.

Unfortunately, there is still no cure for NAFLD or NASH, the third most common cause of chronic liver disease in India. People need to know about NAFLD and NASH because of their silent nature. Consequences of a fatty liver are not immediately visible. But, when it does, it can be serious. Most cases of fatty liver are diagnosed accidentally. Hence, people with poor lipid profile, diabetes, hypertension and obesity need to take up regular check-ups. What’s more, in a dangerous trend, NAFLD is now being found in children as well. Obesity in growing children is to be blamed for this.

There are a few bright spots in the take-home message about fatty livers. First, most cases stay relatively stable and don’t result in serious liver disease. Second, with changes in diet, increase in physical activity and weight loss, the condition can be controlled to a large extent and prevented. Third, while there is no medication to effectively cure fatty liver, NAFLD is a reversible problem. The only panacea is a healthy lifestyle. Finally, treatment with expensive drugs and side effects is not the way out, but losing weight is. Weight loss has a remarkably positive effect. And it benefits many other parts of the body, not just the liver.