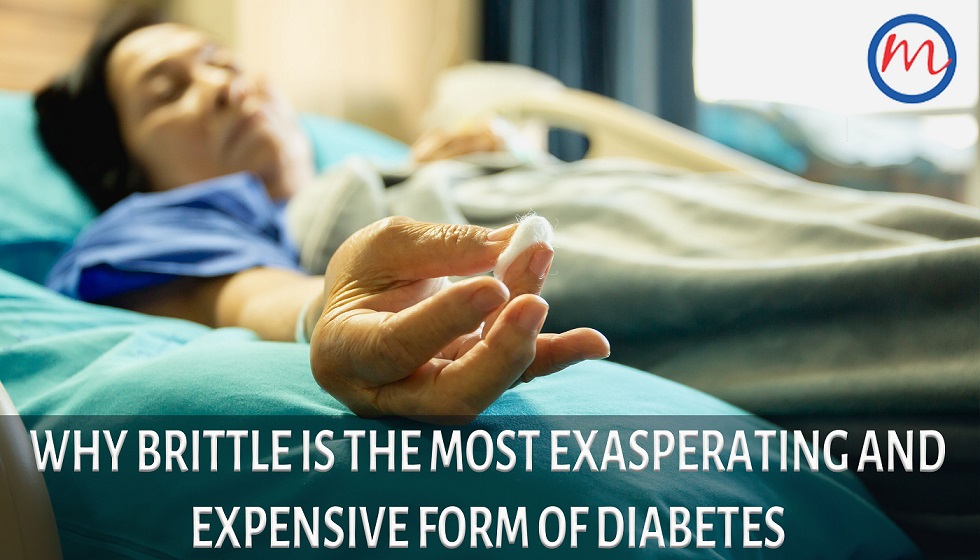 Why Brittle Is the Most Exasperating and Expensive Form of Diabetes
November 18, 2020

Everyone with diabetes experiences occasional swings of blood sugar. But there is a small but conspicuous group of people, whose lives are constantly disrupted by such instability of blood glucose, that are severe and unpredictable. They are the people with brittle (or labile) diabetes, a term first coined in the 1940s. It is a type of hard-to-control diabetes, characterised by quick, wide and abnormal variations between too high (hyperglycaemia) and too low (hypoglycaemia) blood glucose levels.

Brittle diabetes, however, refers to those cases in which the instability disrupts life. Between the many high and low episodes of glucose swings, it causes a huge burden on the patient: from the disrupted quality of life, complications due to damage of small blood vessels, frequent, multiple and expensive hospitalisations, pregnancy complications and shortened life expectancy.

People with brittle diabetes spend a lifetime walking a tightrope between wide oscillations of blood sugar levels, in response to the same dose and type of insulin. Research shows that their glycated haemoglobin (HbA1c test which measures the amount of blood sugar attached to haemoglobin over three months) are typically elevated (10-14%, when the normal is considered to be 7%). According to some it is more common in women than men and tends to be less common in people over age 40. To many others, it occurs in both men and women and of any age. People with type 1 diabetes are at the greatest risk of brittleness.

The signs and symptoms of brittle diabetes are unpleasant and distressing for both patients and their families. These also vary from patient to patient, although remain constant for an individual. The symptoms can range from loss of coordination to impaired intellectual function, confusion and inability to concentrate, blurring of vision to sweating, anxiety, tremor, hunger and palpitations. Most people manage to stay out of major troubles much of the time, but for some unlucky few the disruptions recur very frequently.

Most people with brittle diabetes learn to recognise and act upon the warning signs of hypoglycaemia. In some people, these symptoms do not necessarily manifest. Or they do not recognise that their blood sugar has fallen too low. This is called ‘hypoglycemia unawareness’—a unique characteristic of brittle diabetes. Unless treated by immediate ingestion of carbohydrate, patients tend to lose consciousness, what is called ‘hypoglycaemic coma’. Left untreated, the coma may last for several hours, and even be fatal.

Another serious condition associated with brittle diabetes is recurrent ketoacidosis. When the body does not have enough insulin to use glucose for energy, it starts to burn down fat. The process causes a chemical reaction, leading to a build-up of toxic wastes, called ketones, in blood and urine. Symptoms of ketoacidosis include excessive thirst, frequent urination, nausea and vomiting, abdominal pain, shortness of breath, fruity-scented breath, and confusion. Untreated ketoacidosis can be fatal.

Keeping diabetes under good control is key. For that, assessing eating habits, physical activity, compliance with treatment, correct application and dosing are as important as other conditions like stress, depression, drinking problems. A reduced carbohydrate diet to help reduce wide swings in blood glucose, and closer monitoring with new technologies, such as continuous glucose monitors and subcutaneous insulin pumps, are at the heart of such efforts. If psychological issues are suspected, counselling, cognitive and mindfulness-based therapies are examples of treatments that have had success in dealing with problems such as stress, anxiety and depression.

Therapeutic strategies for underlying organic causes need to be resolved. Radical new treatments are coming up. Since the pancreas is the core organ for processing glucose in the body, pancreas transplants are emerging as the new frontier for managing brittle diabetes. Artificial pancreas technology is currently being tested in clinical trials. Research on islet cell transplantation has also shown promising results.

Last but not least, maintain a healthy weight, read up and widen your general diabetes knowledge, visit a therapist to manage stress and depression. And consult an endocrinologist (doctors who specialise in diabetes and hormonal imbalances) to keep brittle diabetes under control.