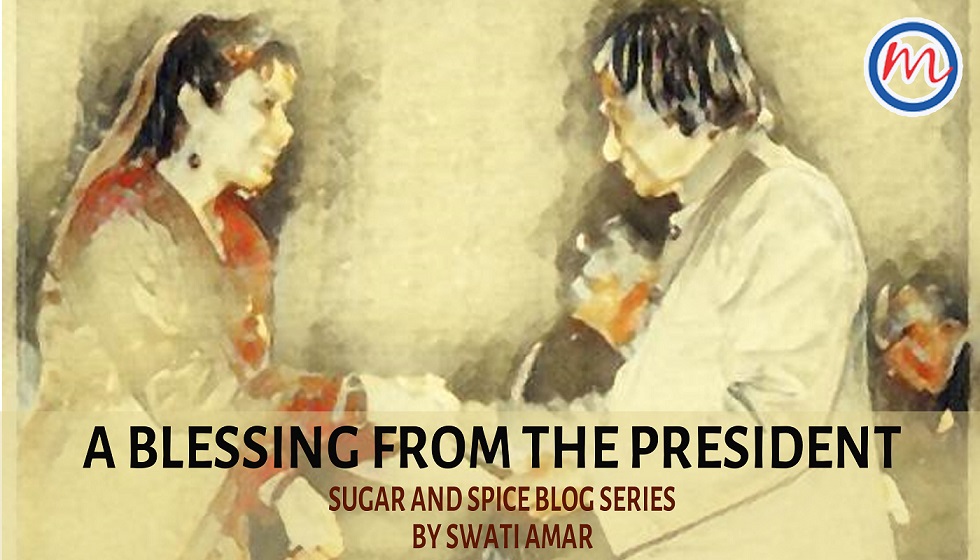 A Blessing from the President
February 18, 2021

Before my providential visit to interview Dr. Mohan at Dr. Mohan’s Diabetes Specialities Centre, we were visiting a voluntary hospital where Niky was under the care of one of the most senior diabetologists of Chennai city, who was heading the Diabetes department here. While the entire process of testing took about half a day at this hospital and was immensely stressful for her, there was an additional source of tension for us. The diabetologist would also insist on a Fundus Fluorescein Angiography (FFA) a procedure used to examine the tiny blood vessels of the eye. A dye called fluorescein is injected into a vein in the arm, which reaches the blood vessels of the eye and photographs are taken, which would reveal any adverse impact of diabetes on the eye.

This procedure was done at a hospital far away from our home and the child had to be taken for the test while fasting. It was a harrowing experience to commute to the hospital and plead with the callous hospital staff who would not understand the trauma a small diabetic child on fasting underwent when subjected to the rigors of this test. He would insist on us waiting for a long time before she would be taken for the test to be performed.  Niky was usually slipping into low sugars and after the procedure, had severe headaches and was nauseous. We later came to know that this test was not necessary for a child who was recently diagnosed with diabetes, but meant for those who had lived with diabetes for some years! In the midst of these visits, we also had to commute to an orthopedic store that was way too far from our home to get special shoes made for Niky that was needed ever since she had had her knee surgeries when she was four.  These were anxiety-ridden visits and needed a lot of preparation to spend an entire day commuting, giving measurements and follow-up visits for fitting and collecting the footwear.

Life was going on as if the entire family was on a super-fast roller-coaster ride, especially for Niky. Amidst the constraints of a strict diabetic management regimen that involved daily insulin injections and several finger pricks, eating frequent small meals, attending school, completing homework as well as music and art classes Niky chose to have, and her writing assignments for newspapers and eminent magazines like India Today, we had another peculiar problem to deal with. Somewhere in the midst of the to-do, Niky had started her periods and we found that her sugars were high a few days before periods, apart from other physical discomfort and pain. However, without fail, on the fourth day of every period, her sugars would dip dangerously low during early mornings and a couple of times she went into convulsions and had to be hospitalized to set her sugar balance right. During these episodes and at other times she used to wake up after nightmares and start screaming in the middle of the night. These incidents were traumatic for us as her parents and it also impacted her little sister, who was not only observing all the unusual happenings our family was going through but was emerging as a perceptive and resilient child. She was going through her own issues at school and she too was developing varied interests, partly inspired by her sister and partly because she was an astute and dynamic child who liked to experiment with various activities to appease her energetic brain.

It was around this time, I was writing for various publications in English and Tamil and started contributing to newspapers like The Hindu and the magazine, The Week, writing on healthcare. For an article on diabetes for The Week, I had scheduled a meeting with    Dr. V. Mohan and met him at Dr. Mohan’s Diabetes Specialities Centre.  Whenever I interviewed diabetologists, I always made it a point to speak about T1D because I was reading a lot about this condition and personally, wanted to equip myself with better knowledge so that I could help our daughter cope with T1D. My meeting with Dr. V. Mohan was a turning point for Niky and for our family as a whole.

It was not only an enlightening and insightful interview, but I realized here was one doctor who had a global perspective and a modern scientific approach to diabetes prevention, treatment and management. He was also constantly trying to upgrade diagnostic tests and treatment procedures and adapting global approaches to suit our cultural practices and customs. Dr. Mohan’s Diabetes Specialities Centre had elaborate diet consultations that advised a flexible menu to diabetics based on their preferences, age and dietary habits. They also strongly advised regular exercises and a systematic approach to self-monitoring and management of diabetes. Tests were relaxing and the team was efficient and compassionate. There was a canteen that provided good food for the patients and their attendants. For the first time, I felt hopeful that probably life can ease out a little for our princess. Even as I was waiting for the right opportunity to ask the Doctor about taking on Niky as their patient, Dr. Mohan himself asked me how I knew a lot about diabetes, based on the questions I had asked.

I told him that our daughter had T1D. He informed me that their hospital had a scheme; ‘Direct’ that offered free testing and treatment for juvenile diabetics and immediately offered to take Niky under his direct care and a beneficiary of the scheme. I was overwhelmed by this offer and agreed. From here on, Niky came under the direct care of Dr. V. Mohan and received free treatment till she became independent. Her life under Dr. Mohan’s care took a turn for the better in every which way. Incidentally, this centre continues the ‘Direct’ scheme and offers free treatment, insulin and blood sugar monitoring to children with T1D.

When Niky had to appear for her 10th standard board exams, more than the studying part of it, planning for her to take the 3-hour long exam was more challenging, because no breaks were provided to children like her, who had health conditions that warranted snacking in between. We carried a snack with us, which we asked her to eat just before she entered the hall and were waiting with a snack right outside the venue, once she returned from the exam.

Niky passed her 10th standard with good marks and decided to take up English Literature and Economics in another school that offered humanities so that she could pursue a career in writing.  It was at this school she won many awards in writing, along with several others in spoken events, music and painting. She was made the editor of the school magazine and won consecutive silver medals from the Prime Minister of India and the President of India for her writings. However, on the first occasion, she was unable to go in person to collect her medal from the Prime Minister, as she was hospitalized due to some illness. The second time around, when it was announced that she would receive the medal from Dr. APJ Abdul Kalam, who was the President of India back then, as a family we flew to Delhi to witness the award ceremony and see Niky receive the award from the noble leader. It was one of those moments in our lives when we were grateful for all the pursuits our beautiful princess had undertaken, despite the cruel blows fate continued to deliver her small frame.

Dr. Mohan was one of the prime reasons for the resurgence of hope and optimism in Niky even as she saw him as a mentor and an idol who inspired her to live the way she aspired to, giving her the confidence that she can live a normal life, despite T1D.